The credibility of 3D scenes with autonomous populations of humanoid characters relies to a great extent, on their ability to show plausible behaviours. In that sense, the actions of individuals within groups of biological humans are not homogeneous nor periodic, and consequently, the heterogeneity and spontaneity of the behaviours performed by procedurally generated inhabitants are amongst the key factors for the quality and realism of the simulations.
One area of knowledge sharing the interest in related themes of complex phenomena is Artificial Life (ALife), a discipline characterized by the study of complex processes observed in organisms and communities. We are interested in investigating how the framework of ALife can benefit the field of crowd simulation, namely for its emphasis on the phenomenon of Emergence and Self-organization.
We have built on this type of systems to develop an agency model for generative populations of humanoid characters with social dynamics based on biological tenets and an economy of resources. The purpose of this study is to understand the impact and benefits of techniques from the framework of ALife implemented in the context of behavioral simulation of humans in groups and multitudes.

To build this model we have put together three frameworks: a) motivations are driven by ALife (Computational Ecosystems), b) decision making is based in reinforcement learning, making use of a c) tripartite scheme of psychology, common in  affective computing.

We have defined a 12 states Markov chain, where transitions between action-states are rewarded based on 6 affective functions (motivation, valence, novelty, urgency, control and domination).
Every appraisal generates changes on the emotional state of the agent, and the recursive workings of emotions and temperament influence the action choice as well as the expression of the actions performed. 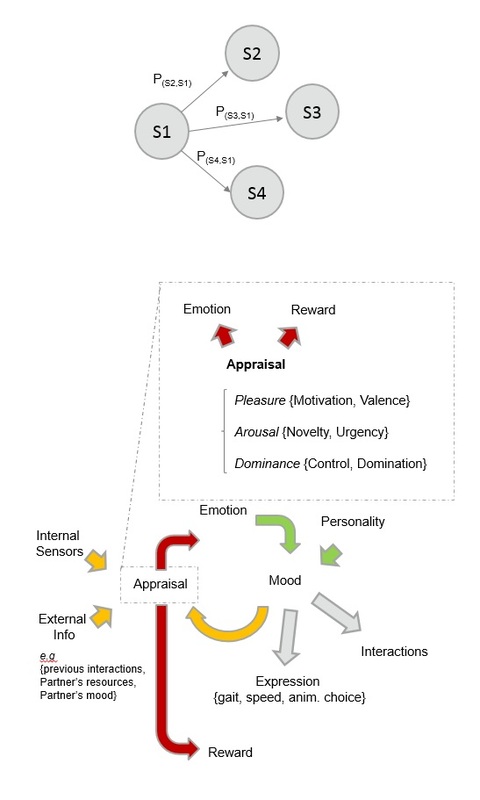 A first video documenting the results is available [Link]