With the fall of the caliphate of Cordoba and in the absence of an united power, there arose, on the Iberian Peninsula, in 1031, a series of independent kingdoms, which established and fought over by the different local forces, Arabs, Berbers, Mozarabs and converts.
It was in this climate of dispute and war that the Abádids created the Taifa of Seville, which soon encompassed the Gharb region and Silves. Al-Mutadid Ibn Abbad, Lord of Seville, in this way also became Lord of Silves and appointed as governor his son Al-Mutamid Ibn Abbad, born in 1040 in Beja (Portugal) who would make Silves his capital from 1053.
​
​It was along with Ibn Ammar, a poet native to the region and who became his friend and advisor, that Al-Mutamid gathered in Silves a court of intellectuals and poets who would make Silves not only a political and administrative capital but also a cultural capital, attaining at that time a splendour never seen before and gaining a considerable importance throughout the south far west of the Iberian Peninsula.

In 1069, Al-Mutamid left Silves and became king of Seville, entrusting Silves to his faithful friend Ibn Ammar, who later betrayed him and, for this, was executed.

In the 11th century, under King Al-Mutamid Ibn Abbad, who would write some of his most beautiful poems in Silves and who would enrich the city with grand buildings, Silves also saw the flourishing of many great poets, philosophers and geographers, such as Ibn Ammar, Mariame Alansari, Assilbia, Ibn Qasi, Ibn Mozaine, Ibn Badrum, etc.

In an attempt to defeat the growing Christian threat, Al-Mutamid Ibn Abbad requested help from Ibn Tashfin, chief of the Almoravid Dynasty, who at that time ruled over the whole of the Magreb. Without knowing it, Al-Mutamid was also signing the end of his reign and of the Taifa Kingdoms. In 1091, he was exiled along with his family to Aghmat near Marrakech, the Almoravid capital, where he died in 1095.
[Source: http://waysofthegarb.webs.com/history.htm ]

Our goal is to build a historically consistent simulation of the city of Xelb, during this period. We want to capture some of the flair and feel of the atmosphere of the city in that time. For this purpose, we will model buildings and population in 3d, according to the input provided by the archeologists from the Museum of Silves. 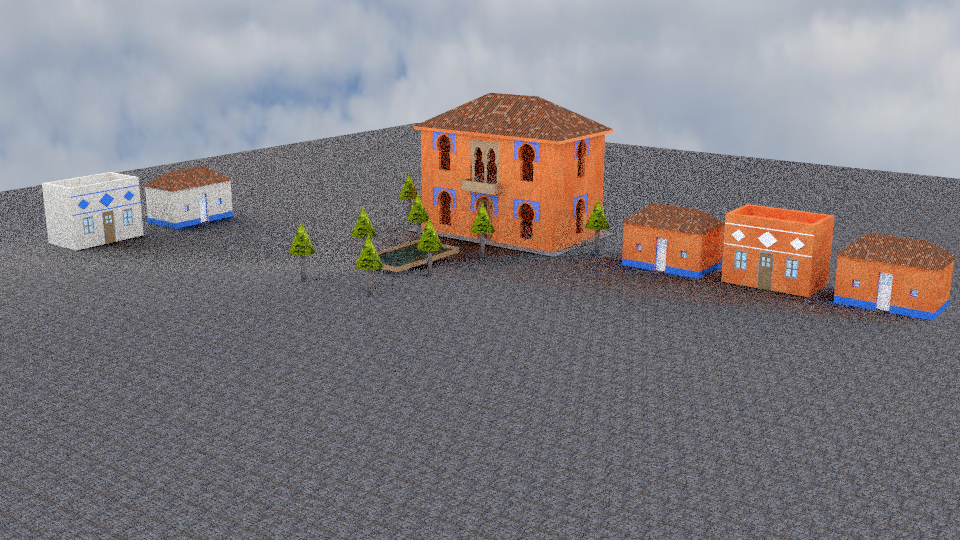 This urban scene was created thanks to the software Blender combined with a Python script. Three 3D models of buildings are used in this scene with different colors.
The aim of the Python script is to add, in the same scene, several buildings and the environment (trees, pools…). In this script it is possible to choose the number of elements, their places and their directions.